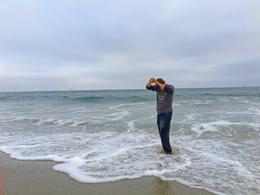 When the time came to incarnate into an Earthly physical body again, I was sucked into a portal that morphed into a large etheric glowing white holographic tube. My light traveled within it like a shooting star that shot out like a rocket so fast that if you turned your head for a second you missed it. I traveled through that tube feeling my soul and consciousness being crushed in a weight of heavy darkness as the higher-self soul part of me dropped into the unfamiliar foreignness of the lower-self. Knowing the danger of what I was risking my soul thought, “What am I doing?”

Back home there is no such thing as fear or self doubt, but that was shifting the closer I was to puncturing into this plane. The claws of the Darkness reached in towards me giving life to the warped ego within that expanded underneath the Earth’s density. The unaccustomed self-doubt manifested out of the fear that I would lose my connection while on Earth.

I remember the tube growing darker before I shot into the human body that was just about formed inside my mother this lifetime. My soul snapped into this unacquainted tiny body and was instantaneously crushed down by the weight of it that created a painful bloody scream like a thousand knives plunging into me. It was like putting on an uncomfortably heavy storm drenched coat.

The second my soul slammed and integrated as one with this physical body, my mother’s water broke. After I entered into this Earthly life, the memories grew scattered and suppressed partially cutting in and out of my psychic senses over what I recalled as my soul’s agreement, but fading in and out of this consciousness. Every cell was suffocating in this unexplainable horror I never thought imaginable from home. Officially trapped and restricted from the movement I had been used to in Heaven, I realized I’ve changed my mind and did not want to be back here, but it was too late.   God will take you through Hell just to get you back to Heaven.

When your soul travels to the Earth plane to be born, you're traveling through a light tube like tunnel that grows more dark, suffocating, and traumatic as you reach your temporary human body where you exit out of your mother this lifetime into this world. Saying that it’s traumatic doesn’t do it justice, because it is truly a horrifying experience transitioning to Earth. The distressing remains never end for many people as they function through their Earthly lives with that heavy burden on their soul and not knowing why.  When you die you move through another similar tunnel, but that etheric dark tunnel and tube is as wide as a small town, and begins to glow lighter the closer you are to reaching home.  Transitioning back to Heaven is the extreme opposite experience compared to travelling to the Earth plane.  It is much more awesome, amazing, and exhilarating.  You travel away from the Earth plane and closer to the Light where it lifts you back up beyond comprehension.  If you survived your human birth, then take comfort that the human death is easier than you can imagine.  It’s like you fly coach to Earth and then first class to Heaven.  You’re also traveling with others that are making the trip to and from Earth at any given time.  It’s almost like the infamously crowded 405 freeway in Southern California!

Every single soul has access to their soul's memories outside of its current human life.  It's challenging for many to remember it, since one can barely remember every single shred of their childhood this lifetime, let alone what happened before that.  It takes exceptional discipline and a hyper psychic sense to retrieve some of it.  Some of what I was shown about my soul's birth into this Earthly life may seem contradictory to what some human beings feel to be true that would be contrary to that.  There will always be differing views on certain matters. What I'm shown isn't demanding that this is the way it is.  I'm just acting as the translator and relaying what I’ve been shown through the veil is all.

As the soul is traveling to the Earth plane there is a great deal going on during that process. One of those things is that the soul's energy and consciousness is already merging in with the physical body in preparation for its arrival during the human pregnancy, since like all heavenly beings the soul can be wherever it chooses to.  This is why the soul will also start to feel some measure of pain during the traveling phase, because the physical body on the Earth plane experiences pain.  The soul that will inhabit that body is simultaneously connecting some of its consciousness into it before the complete soul and physical unification.  Meanwhile, the physical body is growing within the human mother at the same time.  When the soul is fully integrated with the physical body, then that's when the physical birth into the Earthly world is about to happen.

If the physical body dies before being born whether through an abortion, miscarriage, or any other complications, then the soul's journey is abruptly halted and it's sucked back through the tunnel to the Other Side.  Due to its strengthened psychic senses, it knows what went wrong or what happened.   The same goes for if the physical body dies as a baby not long after being born, then the soul is also pulled back home to Heaven.  Although, if that soul's human mother ends up having another child, more often than not, the same soul that was intended to merge before the previous complications will usually unite with the physical body of the mother's next pregnancy.  This is pending that she gets pregnant again and the child survives, so it's the same soul, but in the newborn child.

All souls suffer quite a bit with much of it suppressed within the memory bank.   Every single one of the eight billion souls on Earth at this time have endured the traumatic journey to come here and for some more than once.  We can all take in more than can be grasped, which means you’re stronger than you may give yourself credit for. 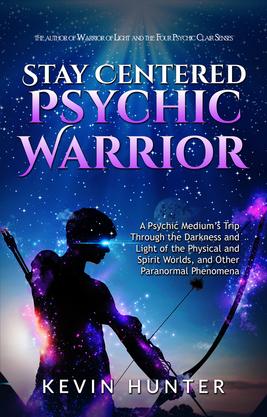 Available wherever books are sold including:

In Stay Centered Psychic Warrior, metaphysical teacher, psychic, medium, and author, Kevin Hunter talks about what it’s like battling between mental health issues and the deeply potent psychic input that continuously falls into his soul’s consciousness throughout each day. He offers plenty of examples and discussions of his brushes with spirit, seeing and hearing the dead, the power of the Darkness and the Light in both the physical and spirit worlds, along with sharing his numerous personal psychic and mediumship instances, glimpses of the Other Side, near death experiences, past lives, soul contracts, traveling to and from the Spirit Worlds, spirit guides and angels, recognizing your own psychic gifts, and much more!

Kevin grew up in a volatile and toxic home full of massive ongoing traumatic child abuse that led his soul to permanently break apart. This ignited an array of anxiety disorders and addictions to overcome. On the opposite extreme end was his infinite profound psychic related visions and foresight. Having battled both since childhood, Kevin describes his psychic gifts as being both a gift and a curse.

The gift is that it helped effectively guide him through many soul transformations, life lessons, and challenges while recognizing blessings and opportunities to seize with grand confidence. The curse being due to how potently overpowering the psychic input can be at times while aggravated by the human mental health complexities placed on an exceptionally sensitive soul. Absorbing every incoming psychic nuance and vibration from both the physical and spirit worlds can be a challenging one, but through the power of the Light, he is sanctioned to know that his Divine role as a warrior soul means you are trained to withstand any storm. This unique autobiography focuses on psychic and mediumship related content coupled with the soul’s journey and purpose.

Stay Centered Psychic Warrior is an intensely forceful and revealing read that doesn’t shy away from the uncomfortable, the Darkness, abuse, mental health issues, while uplifting it with the many blessings of the Light and intriguing day to day psychic phenomena all in one. Allow it to inspire you to recognize your own psychic gifts knowing there is much more to this Earthly life than can be seen or comprehended. Be empowered to break through the rubble and stand strong and centered under the powerful Light that shines through any Darkness.

Available in Paperback, Hardcover, and E-book

A Psychic Medium's Trip Through the Darkness and Light of the Physical and Spirit Worlds, and Other Paranormal Phenomena 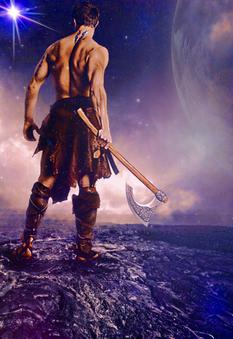